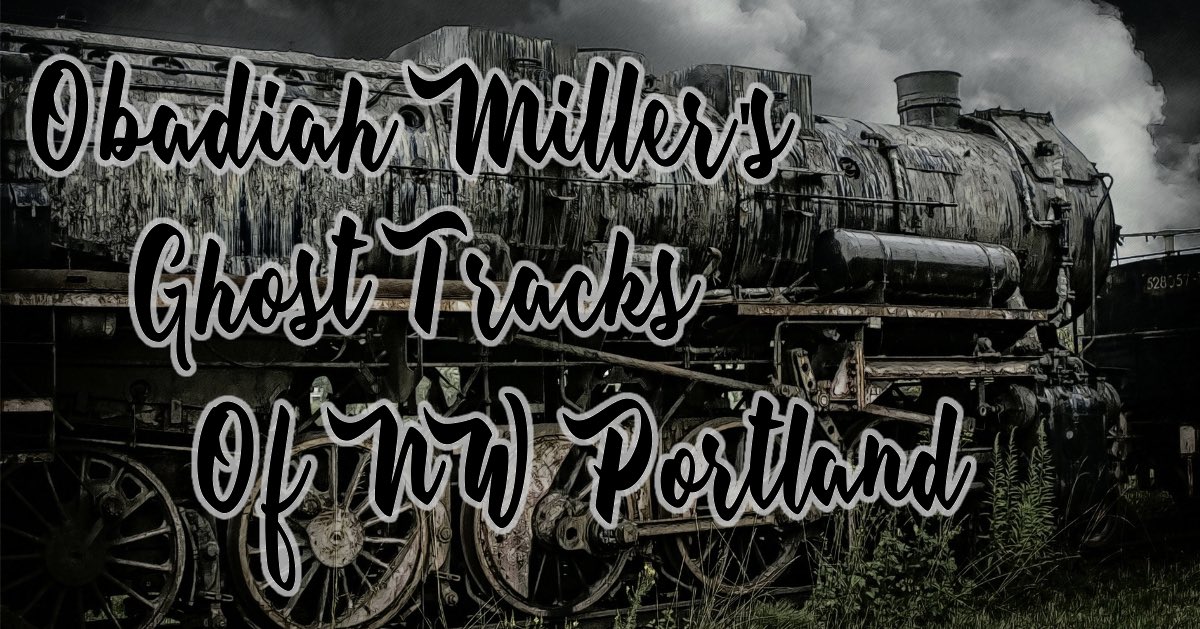 Obadiah Miller and the Ghost Tracks of NW Portland

Sure, you know about The Giant Ghosts of the South Park Blocks, but those are hardly the only ghosts in Portland. Why, the city is full of ghosts (and not just in old buildings turned into brew pubs). You can hardly walk fifty feet in Portland, especially the Westside, without finding a ghost or some sort of marker to remind us of a ghost. Oh, but not all the ghosts are human ghosts. There’s even a ghost train on the tracks of NW Portland!

Ok, to be fair, the ghost train has a ghost engineer. The rumors say this engineer’s name was Obadiah Miller. Obadiah was the only son of shunned Amish parents. Born in Lancaster, PA in April 16th, 1887, Obadiah’s family moved westward shortly after his birth. The Millers settled in the Tualatin Valley and ran a successful berry farm.

Obadiah never liked farming. Instead, Obadiah wanted to work with big, powerful machines. Obadiah was particularly fond of trains – sure, railroads were far from a new technology, but they were big and powerful and important. Obadiah liked that! While in his mid teens, Obadiah often times snuck out and went to the train yards in NW Portland, just to watch the trains.

One day, on a whim, Obadiah hopped aboard a boxcar as a train departed….just to see what it felt like to ride the rails. He would have ridden the train to its terminus, but he knew his parents would be furious. So Obadiah hopped off after about a mile, and found himself in an industrial area in NW Portland. After that day, Obadiah made a habit of hopping the same train as often as he could, and ditching the train in the same area. He never did get in trouble. The only problem Obadiah ever found was the one time a transient pushed him off the train prematurely.

In 1917, the United States entered World War I. Obadiah was drafted, along with all the other abled bodied men age 21-30, on June 5th. While Obadiah’s family was shunned by the Amish, the Millers still believed the anabaptist doctrine of non-resistance. Obadiah tried to get out of the army on religious principles, but the army would not budge. Instead, they used Obadiah as a train engineer – mostly hauling heavy weaponry through France.

Of course, sometimes Obadiah would operate trains hauling supplies, and even wounded. Obadiah always liked these missions the best – as Obadiah felt he was helping people instead of killing people. He was providing them with food and refuge. Ironically, it was on one of these runs of refuge where Obadiah would meet his fate.

During the Spring Offensive of 1918, the Germans broke through the Western Front. Obadiah was operating a train near Roye, Somme – and suddenly found him and his train (loaded with wounded) behind enemy lines. What could he do? His beliefs prohibited fighting, yet he had to protect these poor souls. Sure, his train had armed guards on his train as well…but these guards were no match for German tanks! To make matters worse, the radio reports said a German Whippet Tank was heading for the train!

The ranking officers devised a plan. The decision was made to hide the wounded in a nearby cave. Obadiah was ordered to guard the train with his life – shoot to kill. Obviously, Obadiah would not fight or kill….it was against his religion. A less intelligent man might have protested right then and there. Oh, but Obadiah was smart. He came up with a plan of his own.

The soldiers evacuated about seventy five percent of the wounded, when the German tank arrived. Oh and….what a horrid machine this was! Obadiah loved machines, but this tank…it was some kind of monster! Some kind of devil beast with motors! Obadiah, not wanting to kill another human, had an idea to shoot a minigun near, but not at the tank. Obadiah ran away from the train, so as to draw attention away from the soldiers evacuating the wounded. With gusto he fired round after round, missing the tank, but only slightly. Of course, the tank commander turned his sights on the mini gun toting soldier.

The tank fired one shot….just one shot….and Obadiah was no more.

Oh, but the distraction worked! The other soldiers evacuated the last of the wounded. The Germans never found the wounded, and man lived because of Obadiah’s sacrifice that day.

Do not weep for Obadiah, dear friends. Obadiah’s eternal reward reunited him with his beloved trains. Obadiah, now a ghostly presence, operates a train all throughout his home area of Portland, and beyond. Obadiah, not bound by the presence of usable tracks, often times runs his ghost train around the NW industrial area. He still feels a twinge of nostalgia, even in his ghostly form.

Most people never see Obadiah’s train mind you – even if they happen to be around the industrial NW Portland area. Most people can’t see ghosts of any kind….or rather they refuse to see them. Yet, those who wish to see, might just catch a glimpse of Obadiah’s ghost train if they’re in the right place at the right time. If you’re one of these unfortunate people, waive hi to Obadiah.